Additional music by (and by kind permission of):
Steve Hackett

This June we are excited to host an Arts Festival in partnership with Hammersmith and Fulham Arts Festival 2018. This year we have a wonderful group of talented artists we cannot wait for you to meet!

Schools Workshop (by arrangement with schools)

We are now able to offer lessons in our theatre space for beginner and intermediary artists to develop their skills under the tuition of professional fine artist, Natan Heber. The classes take place on a Thursday evenings from 7pm.

Rates for tuition vary according to your circumstances (there are special rates for the unemployed, elderly and those in full-time education).

Why not attend for a free taster session and chat through your requirements with Natan and he will take account of any unusual circumstances.

On this page you can see several examples of Natan’s own art and see clear evidence of his skill – the kind of skills he would hope to transfer to your palate. We are very proud to have this Brazilian as our artist-in-residence.

Natan will be one of the principal exhibitors at our annual art exhibition in June.

What: Go Forth With The Shakespearience

One day whilst I was in Stratford-Upon-Avon with the Royal Shakespeare Company, I woke up in my hotel room with a fairly fully formed idea for bringing Shakespeare to schools, using professional actors and musicians, and giving young people a first exposure to live theatre.

It’s now 8 years since we started working with local schools as part of their literature programme. We’ve always worked with the schools in the areas of faith and religious education but we thought as well as enhancing the teaching in those areas, we ought to give back to the community in the areas that God has gifted us in. This has meant that over those years we’ve worked on poetry workshops (with Paul Cookson), performances of Shakespeare and more recently, since Chris Jarvis has joined us in a range of other hands-on activities.

One of the areas of Chris’ expertise is in light and sound and technology so in our most recent exploration of Shakespeare, he was in the sound and light booth whilst I directed and produced.

In addition, it was good to have Richard Evans back again as co-director and playing the part of Sir John Falstaff. We also added in for the first time, Kathleen Ross who was musical director and utilised her skill on the viola da gamba (a 15th/16th century forerunner of the cello).

In previous runs of the Shakespearience, we have utilised scenes from these Shakespeare plays:


This time we decided to concentrate mostly on Shakespeare’s “historical” plays and whilst including again a scene from Hamlet, all the other scenes were taken from plays, we had not used before:

I once again played the part of the mysterious Narrator, who is trapped in Shakespeare’s world, until he learns the lessons that the plays have for us. 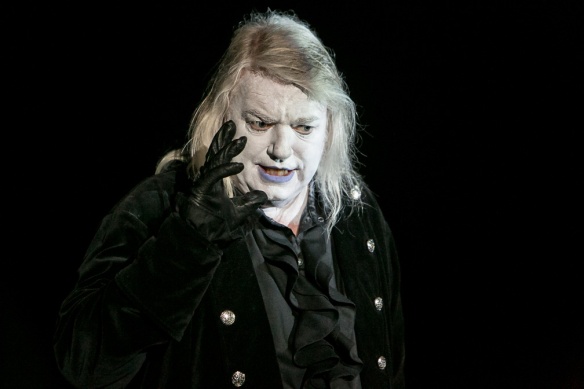 Darren Hirst as the Narrator

Also, this time, we had a new group of musicians who interspersed the dramatic scenes with music from Shakespeare’s era.

Our story began with a scene from “A Midsummer Night’s Dream” where by the use of fairy dust, a fairy (played by Evangeline Briazza) and Robin Goodfellow (which I played) transport the audience into the world of Shakespeare. 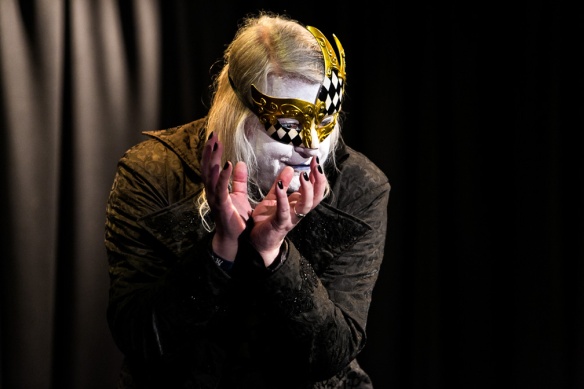 Then the audience encounters Sir John Falstaff and his efforts to trick two wives who are based in Windsor of their husbands’ wealth, in a group of scenes from “The Merry Wives of Windsor”.

Debbie Bird and Anna Ray in The Merry Wives of Windsor

Having failed to gain money that way. Sir John moves to London and, in scenes from the Henry IV plays, leads Hal, the heir to throne of England, into a life of disrepute where together they become robbers and keep bad company.

Both Hal and Falstaff tell the audience of the way they intend to change their ways but their resolution is short-lived. Falstaff, in particular, delivers a monologue about how he wishes to repent and return to the church. This idea of repentance is a key idea of the group of scenes that we put together.

The crux time comes when Hal is told by his father, the King, how disappointed he is in him and how he has become a disgrace to his family.

Hal (Will Henry) is berated by his father, Henry IV (Grant Shepherd)

Falstaff despite his determination to change his lifestyle, turns to the house of Mistress Quickly (played by Caro Breton) who he had known in Windsor and begins an ill-fated relationship with Doll Tearsheet (Angharad Price).

When Hal ascends to the throne, he disowns Falstaff and Mistress Quickly and Doll Tearsheet are arrested. As we move into the scenes from Henry V, the narrator tells us how England declares war on France.

Falstaff dies of a broken heart and his gang go off to join the army. A lot of the remainder of our play is taken up with the idea of when a war is just and the reasons that kings and politicians go to war – sometimes for necessary reasons but sometimes to bring themselves extra wealth or more land. This is another key theme.

One character who is simply called “Boy” by Shakespeare, spends time thinking how he would rather be at home in England rather than on a foreign shore risking his life. Meanwhile, Henry V delivers a rousing speech designed to give his troops heart to defeat the French (Once more unto the breach…) 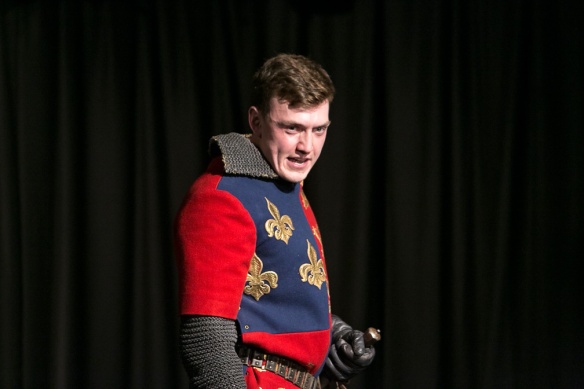 Will Henry as Henry V

With the French defeated the King’s men wander among the field of the dead and wonder about the King’s decision.

The play finishes with us returning to the key theme of repentance and being honest to God as in a scene from “Hamlet”, King Claudius (played by Darren) talks about his decision to kill his brother in order to gain the throne, but now finds he cannot pray.

“Go Forth with The Shakespearience”, as our play was called, played to full theatres some days and even when there were fewer people in the seats, we seem to have gained universally positive feedback. Chris and I prepared follow-up sessions which we have offered to schools.

Over the time of our short run 1100 people from Hammersmith and Fulham and beyond saw our show.

It wasn’t always the easiest of productions. Part way through our heaviest rehearsal schedule, the actress we had chosen to play Mistress Page in our “Merry Wives of Windsor” scenes left because of what you might call artistic differences. We brought in Debbie Bird who did a great job for us despite having limited time to learn the part.

So much of the strength of the production rested on the shoulders of our two senior actors, the aforementioned Richard Evans as Falstaff and Caro Breton as Mistress Quickly.

Because our production straddled several Shakespearean plays, it pushed Mistress Quickly through several changes of direction. The bulk of the show saw her as the brothel keeper of the two Henry IV plays. The later written Merry Wives… finds her at an earlier part in her life where she is a slightly bumbling gossip with ambitions to be part of the well-to-do society ladies of Windsor. Finally in Henry V, she has to deal with the loss of her long-term friend, Sir John Falstaff who is never seen in the play but who dies offstage. Caro handled all of these twists and turns wonderfully. She truly is a marvellous actress.

The accomplished and talented Caro Breton

Anna Ray worked well in partnership with Debbie Bird to bring us the pairing of Mistress Ford and Mistress Page. Anna whilst not really wanting the attentions of John Falstaff, gave her character the right amount of coyness to string the big man along.

The musicians that Kathleen Ross put together were of the highest standard. Kathleen herself was excellent. In Louise Kleboe we had a tremendous vocalist, who is capable of so much in this guise and beyond. Rebecca Waite, our trumpeter, delivered, amongst other things, a sultry “nightclub” version of Thelonious Monk’s Round Midnight. Exquisite. The gents were no slouches either with Will Summers and Stuart Morrell rounding out a tremendous quintet. 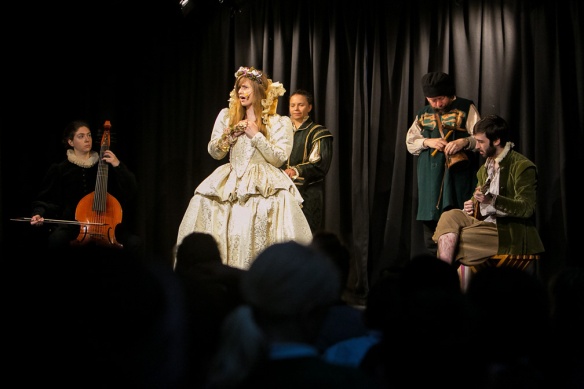 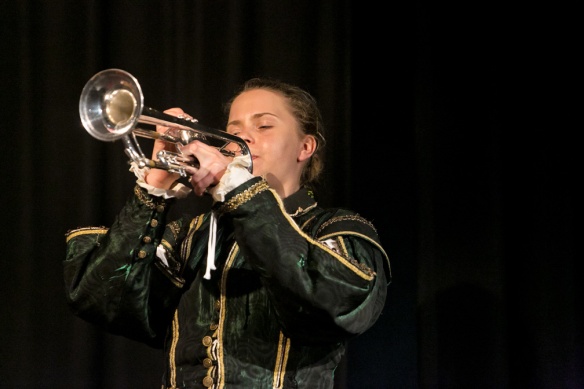 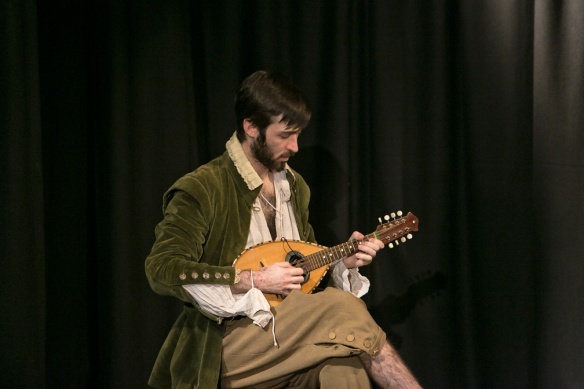 When we were casting this one, we had several hundred CVs to sort through and one of the hardest choices was the final member of the company. We knew that the person we offered the role to would need to play two male roles and the role of a fairy. We had one man in mind but we really couldn’t see him in the Midsummer Night scene. We also had one female that had worked with us before but again she didn’t seem quite right. The difficult process of deciding dragged for the better part of a week but I think ultimately we got it right. We decided that Evangelina Briazza had the edge and we were delighted when she arrived at one of the earliest rehearsals with the fairy role fully developed. She truly was a consummate professional.

The adaptable Evangeline Briazza as Morton

Some of our male actors were a little more limited in the scope and breadth of their ability but fortunately they were well placed to handle what we had given them.

Backstage we had a mix of volunteers and friends, all marshalled by Hanna Olsen who did a great job for us as wardrobe mistress.

It is always going to be difficult to hit the right level when you are presenting a character who is a prostitute to a schools’ audience. This is what we had to do with Doll Tearsheet and Annie Price got it just right for us. Part Barbara Windsor, part saucy barmaid, she pulled it off with aplomb.

In many ways this was the hardest “Shakespearience” I’ve had. I came away from it feeling jaded and found some of the actors more than a little difficult to work with. Time for a little break, a re-examination and a rethink before I decide whether there is scope to do another one. Things will look much clearer in a few months time.

The new edition of the Shakespearience, “Go Forth With The Shakespearience” is now accepting bookings from schools and community groups. Tickets are free to educational establishments who want to bring along an accompanied group. The project is aimed at students aged 9-14 but is open to anyone above that minimum age.

Performances that are available for booking are as follows:

More dates may well be announced once these are booked.